If there is one theme that unifies all parties involved in workers’ compensation, that subject is the desire to remove fraud. Whether it is attempted by the employer/insurance firm or the employee, there is no room for fraud in the system and authentic efforts to remove it are valuable. Thirty-four states have fraud policing in place, but until lately the primary focus has been on employer fraud.

Employer fraud can be more prevalent than individual employee fraud. If thousands of business owners across the country deliberately fail to obtain vital workers’ compensation coverage or misrepresent the job classification of employees who are covered, the fraud committed on the system could massively exceed the dollar quantity of employee fraud.

Another way for employers to attempt to defraud the workers’ compensation system is to declare its employees as “independent contractors”, which would mean not having control over the workers. Clearly, if the individual is truthfully an independent contractor, and not an employee, no coverage is typically necessary. So, to try to evade any legal requirement to pay a premium, the employer would simply not list the employee, and then no premiums would be paid, and thus no workers’ compensation coverage would be available.

Also, by hiding payroll, employers can try to take advantage of hard working employees and also cheat the government by not paying estimated Social Security taxes. Employees should ask their employers who their workers’ compensation carrier is, so that they can rest assured that there is coverage. 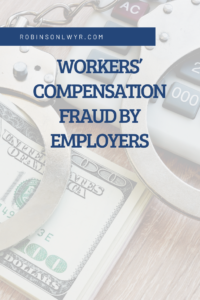 Many states, including Pennsylvania have an Office of Adjudication for Workers’ Compensation which in Pennsylvania’s case is through the Department of Labor. There are measures in place by the state to try to prevent, monitor, and criminally prosecute both individuals and employers who commit fraud. Insurance fraud is taken quite seriously as it is not only illegal, but costs countless dollars and hurts peoples’ lives if they are denied the coverage that they deserve. – See more at: https://robinsonlwyr.com/workers-compensation-fraud-by-employers/#sthash.af4UrYzd.dpuf