Employers should be on the lookout for red flags or inconsistencies such as lack of witnesses or injuries that are not medically consistent with the details of what took place. Notable indicators of fraud include injury stories that contradict each other. This can happen when the injured person tells different accounts of what happened to different people, such as medical providers and the workers’ compensation insurance adjuster. It can also take place when witnesses provide accounts that contradict each other, or contradict the account of the injured person. Other red flags are claims and injuries that are reported just before a major change, such as a strike or a seasonal layoff that is likely to result in the employee losing pay.

Some employees may get injured somewhere else or previously, but then go on to claim that the injury took place at the workplace. Such employees may not only file several fraudulent workers’ compensation claims, but may also file fraudulent general liability or automobile claims. All in all, the number of fraudulent claims forms a relatively small percentage of the total number of claims filed. It is unfortunate that such fraudulent claims often lead to payments over a long period. They also result in loss adjustment expenses or claim payments that should not have been paid in the first place. Such claims are likely to take away benefits meant for employees who have been truly injured on the job and who actually deserve the benefits.

In some cases, workers’ compensation fraud may be committed by employees who were actually injured on the workplace; however, these employees then manipulate the system in a way that they get more benefits than they deserve. They may exaggerate their injury symptoms, extend their medical treatment beyond a certain date, or be uncooperative with treatment plans. They may also apply stalling techniques when employers, medical providers or adjusters take positive measures for the claims management process. Claims made by such employees can be very costly, and may deflect payments from those who actually deserve them. 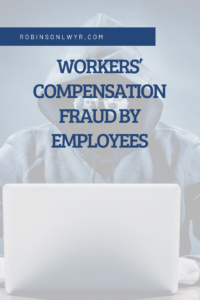 Legitimate workers’ compensation injuries should definitely be reported by the injured worker, and word to the wise, that individuals who attempt to file fraudulent claims will have to deal with the consequences of tough cross-examination, not to mention, possible criminal charges, as insurance fraud is illegal.