When is it OK to Complain about an Injury Suffered at Work?

When It Pays to Complain

Workers’ Compensation case law helps lawyers help their clients, and the case of Gahring v. WCAB (R & R Builders and Stoudt’s Brewing Company), 128 A.3d 375 (Pa. Cmwlth. 2015) is a perfect example.  In this case, the injured worker (Claimant) first worked for R and R Builders where he suffered a low back injury resulting in disc herniations at two levels of his spine.  He settled his case with R and R Builders and their workers’ compensation carrier.  Some eight years later he went to work for Stoudt’s Brewing Company as a line cook, and the next year began to experience increased back pain, which then led to surgery the year after that.  The Claimant argued that the second employer was responsible for his back pain because he had to work increased hours, and most importantly gave sufficient notice of a repetitive traumatic injury to his low back because he complained over time to his supervisor, putting them on notice that this new work as a line cook was aggravating his prior work injury.

At the initial level of litigation before the assigned Workers’ Compensation Judge, the Judge did not hold the first employer liable, ruling that the aggravation of Claimant’s back condition occurred while Claimant was working for the second employer, but also ruled that the second employer was not liable because Claimant did not give timely notice of the injury.  The case was appealed all the way up to the Commonwealth Court of Pennsylvania, and the Court agreed with the Claimant.  The Court specifically ruled that because the Claimant complained overtime to his supervisor about his increased duties and work hours, that this indeed was timely notice and therefore ruled in the Claimant’s favor. 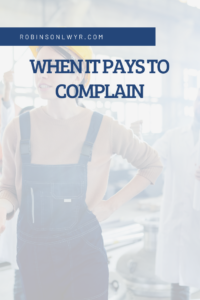 The bottom line is that if you are hurting from a work injury, you should say something and not feel bad or guilty about it.  Although you might think that it can be controversial, it is actually your responsibility to give notice to your employer of a work injury, or you could jeopardize receiving well deserved workers’ compensation benefits.