How are my workers' compensation benefits calculated?

How are my workers’ compensation benefits calculated?

You know what you earned at your job, pre-injury. You know what your gross pay was, and you know how much you took home every week or every two weeks. Now that you’re hurt, who is going to figure out how much to pay you? Is it your responsibility….is it your employer’s…or is it the workers’ compensation carrier’s? The answer starts with your employer providing the workers’ compensation carrier your accurate wage information. It is then up to the carrier to prepare what is known as a Statement of Wages. This document, filed with the Pennsylvania Bureau of Workers’ Compensation lists an average weekly wage or AWW (your gross wages prior to the work injury), as well as your weekly compensation rate.

There are several ways to come up with the average weekly wage, AWW, depending on a variety of things, such as how long you have worked at your job, whether you are a temporary or seasonal employee, whether you have concurrent employment, or volunteer as an emergency worker. To be sure, every single case is different and the wages must be calculated to get to the right amount to pay you, the injured worker.

The most traditional way to come up with the average weekly wage is where workers were employed for more than three (3) consecutive periods of 13 calendar weeks. Especially in the past, when people worked jobs for years and years, this was the method used. Using this particular method, the wage is calculated by looking back on the four (4) thirteen (13) week periods, then taking the average of the three (3) highest in the last 52 weeks (1 year). An experienced workers’ compensation lawyer can help you figure out if your average weekly wage is indeed calculated correctly.

Once the AWW is arrived at, the compensation rate is fairly easy to get. Pennsylvania has a Workers’ Compensation Rate Schedule, which is separated by years. Also, for each year, there is a maximum amount that individuals can receive from workers’ compensation, which is also known as the Statewide Average Weekly Wage. Dollar amounts are listed on the Rate Schedule for easy reference.

Did you know that individuals who are volunteer emergency workers, such as fire fighters or ambulance workers are considered employees under the Pennsylvania Workers’ Compensation Act? Because of their unselfish acts of volunteering, they are given the benefit of having their wages calculated at the maximum, Statewide Average Weekly Wage. If these volunteers work at regular jobs, then whichever of their wages are higher are used.

For those of you who are working 2 of even 3 jobs at the time of your work injury, you have what is called “concurrent employment”. All jobs will be taken into account in calculating your wages. 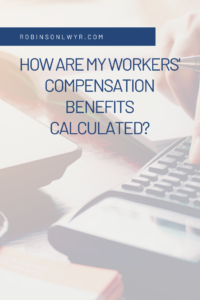 Some people have asked, does my compensation rate increase every year, like getting a raise? Unfortunately, the answer to this is no. Your average weekly wage and resultant compensation rate remain the same for the duration of your claim. However, if you feel that your compensation rate has not been calculated correctly, ask your workers’ comp attorney to check it for you. In fact, one of the first questions that your attorney should ask is whether your wage calculations seem correct to you, if in fact they have been calculated, as you know your wages best. Not to worry, if not correct, your workers’ compensation attorney can file the necessary Petition to rectify the problem.

← Paula is Hatching Up Some Fun
When is the right time to settle my workers’ compensation case? →