WHAT A MILESTONE:
The 100 Year Anniversary of Workers’ Comp in PA

The original law was passed on June 2, 1915, to be effective on January 1, 1916, according to the Centennial PA Workers’ Compensation website.  Although many amendments were made over the years, with the latest made in 2007, the law entitles injured workers to wage loss and medical benefits with a “no fault on the part of anyone” platform when an injury is sustained by an individual within the course of employment.  Because of the no fault basis, Pennsylvania Workers’ Compensation is the exclusive remedy for employees, with few exceptions, meaning that they cannot civilly sue their employer.

How did this law come about?

With the industrial revolution in the United States, Pennsylvania, along with other states considered instituting workers’ compensation law based on a number of things. With the increase in manufacturing and labor intensive jobs, there was a substantial increase in injuries and deaths, which were not being compensated.  There was pressure from the society, as a whole, to address this alarming phenomenon. There was also precedent from England and Germany for such laws.  Finally, employers did not want to face untold civil lawsuits from their employees, without any warning.

The first round of litigation starts with the Workers’ Compensation Judge, then if an appeal is taken from their Decision, it goes to the Workers’ Compensation Appeal Board, which sits at varying times throughout the Commonwealth.  If an employer or injured worker wishes to further appeal that Decision, then it goes to the Commonwealth Court of Pennsylvania.  Appeals from the Commonwealth Court then go to the Pennsylvania Supreme Court, although the Supreme Court will only entertain appeals in workers’ compensation matters that they deem especially important. 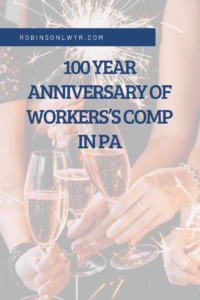 The 100 Year Anniversary of Workers’ Comp in PA

Here’s to another 100 years of helping injured workers!