Paying Tribute to the American Worker this Labor Day Weekend

Labor Day is celebrated the first Monday in September.  It is a creation of the labor movement and is dedicated to the economic and social achievements of American workers.  It is a yearly national tribute to the contributions workers have made to the strength, prosperity, and well-being of our country.

The first Labor Day holiday was celebrated on Tuesday, September 5, 1882 in New York City, planned by the Central Labor Union.  The Vital force of labor had added to the highest standard of living and the greatest production the world has ever known and has brought us closer to the realization of our deals of economic and political democracy. 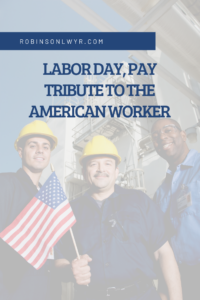 It is therefore appropriate that we pay tribute on Labor Day to the American worker, especially our police and firefighters who give tirelessly to others.  Thank you from Robinson Law LLC!

← Marcellus Shale Expo Takes Over Penn State
Can You Guess The Top Dirty Jobs in U.S.A? →